The SS health service at Majdanek

Józef Falgowski, MA, historian, one of the contributing authors of Medical Review – Auschwitz.

The scarcity of archival materials on Majdanek and its sub-camps, and particularly on the SS health service there, has not only hindered but actually prevented me from taking a scholarly approach to this issue.1 The archive searches I have conducted in the archives of the Majdanek State Museum, the Lublin Voivodeship Archives, and the collections of the Lublin District Commission for the Investigation of Nazi German Crimes and the Main Commission for the Investigation of Nazi German Crimes in Warsaw have not brought the results I had hoped for. There are numerous memoirs by Majdanek survivors, but they haven't answered the important questions, either.

The current state of research on the SS health service at Majdanek can only be described as meager. Only a dozen or so names of the SS doctors and paramedics have been established, together with their offices, powers, and status in the camp’s official hierarchy. The head of the administrative unit V was the Standortarzt or garrison physician of Majdanek. He was responsible to the camp’s commandant for the health of the SS guards in the camp’s security unit as well as of the prisoners. The SS officers who were Lagerärzte (camp physicians) were subordinates of the Standortarzt. Their duties were to supervise hygiene in the whole camp and protect prisoners against epidemics of infectious diseases. So the Standortarzt was responsible for the state of health in the entire camp. 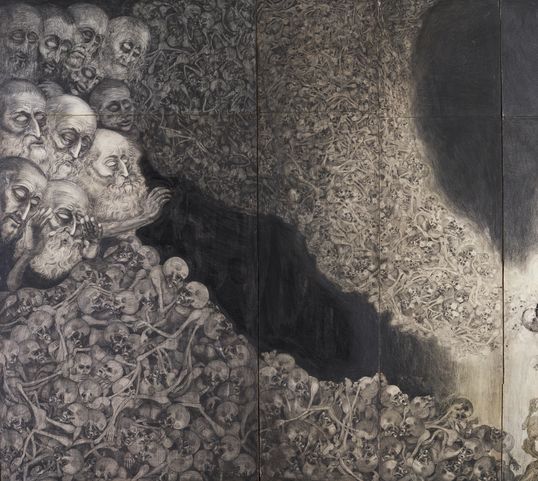 A Gas Chamber. Cyclone B. Marian Kołodziej. Click to enlarge.

There was also a separate group of “disinfectors” in the auxiliary sanitary service. Their job was strictly defined and highly specific. They were specially trained to handle the canisters of Zyklon B (cyclone B) gas, and bring it into the gas chambers through purpose-built apertures to gas prisoners. After the gassing they removed the corpses from the gas chamber and “disinfected” it, ready for the next gassing. The list provided below gives the name of the doctor or paramedic, and, wherever possible, also his date and place of birth, his job(s) in Majdanek and other camps, and information on what happened to him after the war.