There is a short note on Dr Wilhelm Türschmid by Auschwitz survivor Jerzy Mostowski (No. 17221) in the first fascicle of Przegląd Lekarski – Oświęcim (Türschmid’s name is misspelt in the title). Now, after so many years, some new, more detailed information has been collected concerning this eminent physician and our dear fellow-prisoner. There is no need to reproduce the information Dr Mostowski put into his note a decade ago, but readers deserve to be given the facts from the recently discovered sources.

Wilhelm Türschmid’s son Zbigniew, who is also a physician and lives in Wadowice, says that his father was born on 3 September, 1887 at Rodatycze near Lwów.1 Zbigniew’s grandfather, that is Wilhelm’s father, was a clerk in the employment of a railway company and took part in the 1863 Uprising against the Russians.2 Wilhelm attended grammar school in Kraków (Gimnazjum św. Anny No. 3)3 and took his final examinations in 1905. Initially, he went up to the Jagiellonian University to study law, as his parents wanted, but having fortuitously heard a lecture delivered by Prof. Kazimierz Telesfor Kostanecki, he decided to move to the Faculty of Medicine and graduated as a physician in 1911. Wilhelm Türschmid took up a job in St Lazarus’ Hospital in Kraków and specialized in surgery under Prof. Maksymilian Rutkowski. In 1915–1931 he worked in Nowy Targ Hospital as head of the surgical ward and of the entire facility. Later he moved to Tarnów, where he held a similar appointment until September 1939. He lost his job when Germany invaded Poland (as I learned from his son’s letter of 1 March, 1969).

His son’s letter also says that Dr Türschmid was arrested for the first time on 1 May, 1940 and released after a month in jail. The Tarnów Gestapo detained him again in October 1940, and he was confined in the same jail until March 1941, when he was deported to Auschwitz. In Auschwitz he was registered as a political prisoner No. P (i.e. Polish) 11461. Thanks to the help of his friends and the recommendation of engineers with good connections who used to work at Mościce,4 Türschmid was given a job in the Autoschlosserei (car repair and servicing garage). Much later the Lagerarzt5 issued his permission for Dr Türschmid’s employment in the septic surgical ward of the prisoners’ hospital.6 At that time more patients of the prisoners’ hospital were being killed than were treated. There were just a few doctors, and several of the orderlies had had no formal medical training at all. Some of the patients were killed with what was euphemistically called “jabs,” that is intravenous or intracardiac injections of hydrogen peroxide or phenol. That period (early September 1941) also saw the first selections of patients for death by poison gas (their last journey was presented to them as a trip to a “sanatorium in Dresden”7), or by gassing TB patients in the bunkers of Block 11. 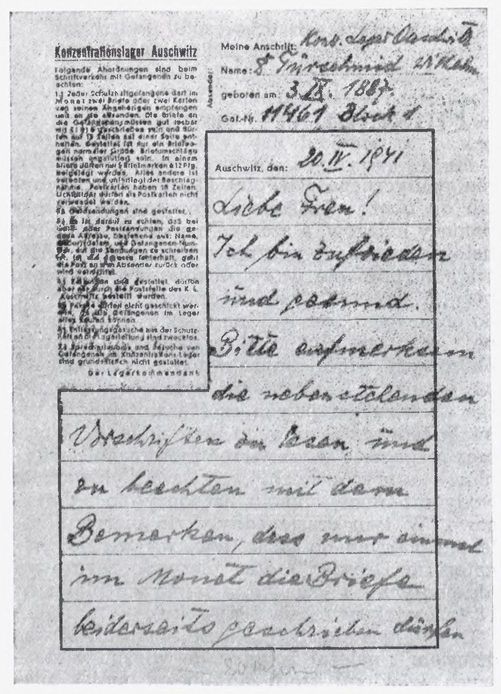 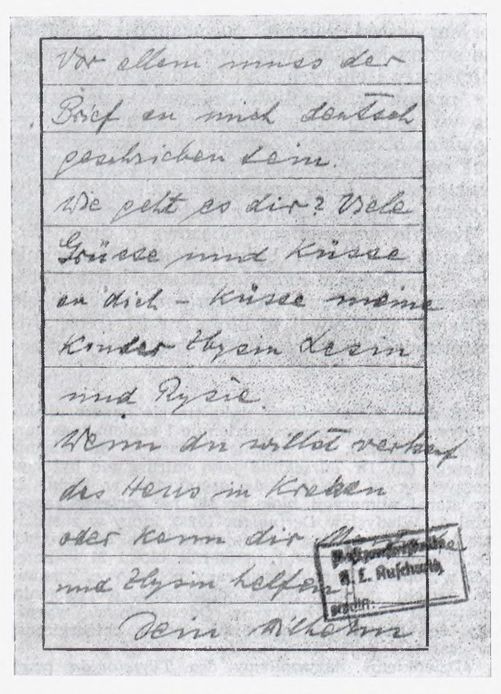 Photocopy of the first pages of Türschmid’s letter to his wife, dated 20 April, 1941. The top left-hand corner of the obligatory form gives the regulations issued by the camp’s commandant governing prisoners’ correspondence and other forms of contact with the outside world. Source: Przegląd Lekarski – Oświęcim, 1970.

Dr Türschmid was nicknamed Dziadziuś or Dziadek (“Grandpa”) by other inmates, because he was one of the oldest prisoners, nearly 54 on arrival. He worked with the utmost diligence, enjoying the respect and admiration of other prisoners, doctors, orderlies, and patients. Dr Türschmid was a genial and understanding man, hard-working, accommodating, and delicate, so he definitely stood out from the crowd in the brutal camp milieu. He was engrossed in his work and tried not to pay attention to the realities that surrounded him. A special bond of friendship existed between him and Drs Witkowski and Gałka, prisoners from Radom.

I have received a short account of Dr Türschmid’s life in the camp from Tadeusz Paczuła (Auschwitz survivor No. 7725), who is now a physician. He and Dr Türschmid worked together for a short time in Block 21, the surgical ward of Auschwitz I. Here are some excerpts:

Dr Türschmid and I were close friends. I met him at work every day and could observe how kind he was to other prisoners, especially sick ones. . . . The hospital did not benefit from his qualifications as a surgeon. The aseptic operation room on the ground floor of Block 21 (or Block 16 in the previous numbering system) was supervised by Dr Władysław Dering (No. 1725), who hardly ever made use of Türschmid’s skills and services. Türschmid’s workplace was on the top floor of Block 21, where he had to “dabble in pus” as he cleaned posttraumatic and festering wounds, treated frostbite and ulcers, and set broken limbs. You could see that Grandpa missed surgical procedures in the aseptic room.

Dr Türschmid owed his nickname to our recognition of his age and expertise. Although he was not as old as our grandparents, he was the oldest of us and he was also a teacher and mentor to the young men, who never dared to be on first name terms with him, as they were not his peers. So the byname was actually a mark of respect. Türschmid was extremely devoted to his “purulent precinct” and performed his job as conscientiously as possible. However, whenever Dr Dering was unable to operate for some reason and Dr Türschmid was called in to substitute for him, his eyes sparkled with joy, he was full of vigour and glee, and skipped downstairs, because he loved surgery. So he removed hernias, varicose veins, and inflamed appendices. Sometimes Dr Dering was generous enough to allow Türschmid to assist him. Yet on a regular basis Grandpa had to stay put with foul-smelling necrotic lesions and other septic problems. Dr Türschmid correctly diagnosed internal and infectious diseases and could give a very early diagnosis of typhus, which allowed him to choose appropriate treatment. Thanks to his presence, the number of patients selected for death by the SS doctors went down dramatically. Türschmid spoke fluent German with an Austrian accent and did his best to protect his inpatients, describing the course of their illness in the best light possible. In this way he saved the lives of many severely sick people. The deportation of a large group of patients to the newly established camp in Birkenau was a devastating experience for him. He swore and wept, he stamped his feet and gnashed his teeth in despair because he was completely helpless when these patients were taken away in trucks to their certain death.

So Dr Türschmid treated and operated on patients and saved their lives. As the oldest of the medical personnel in Block 21, he also taught the younger doctors, such as Zbigniew Sobieszczański, Anicet Włodarski, and Bolesław Zbozień, who can corroborate that fact. All those activities were also observed by Drs Julian Kozieł and Stefan Żabicki, who were later shot at Death Wall in Block 11. For all those men, Türschmid was a father figure and a mentor, benevolent and strict at the same time, and most importantly, they loved him. . . .

In May 1942 the residents of Block 21 were notified that Drs Türschmid and Kozieł were to be transferred to the Strafkompanie,8 whose members lived in Birkenau. The news we had been receiving about the penal unit were hair-raising. The decision concerning the two doctors had been known to Władysław Koszyk, No. 502, formerly a school inspector and now the block clerk, as well as to Feliks Kowalewski, No. 348, a lawyer from Zakopane, now Koszyk’s assistant clerk. A short meeting was held behind Grandpa’s back. As a result, he stayed in Block 21 and the only detainee transferred to the penal unit was Dr Kozieł. The Rapportführer9 received a memo saying that No. 11461 had been admitted to the hospital as an inpatient and was transportunfähig (unfit for transportation). Grandpa, on the other hand, was informed that he was now one of the redundant medical staff. Full of indignation, he swore and snarled, but willy-nilly had to deposit his striped trousers and jacket, and walk the hospital rooms in his shirt and underpants. He was absolutely outraged. He was a patient now, wearing the same gear as other patients, so how was he supposed to continue being a doctor? How was he supposed to take up his scalpel or relocate broken bones? What would the real patients say, especially those who knew him?

It never occurred to Grandpa that the ruse had been devised by his fellow prisoners, who were actually taking huge risks to save his life, to keep him from being transferred to the penal unit; they knew he would not be able to withstand the hard labour and the violence. But it was a short-term solution. On the morning of 16 June, 1942 another order arrived from the Rapportführer:10 No. 11461 was to report in Block 11. That meant execution at Death Wall. Koszyk and Kowalewski were shattered. They asked me to tell Türschmid he had to go and see the Rapportführer. I couldn’t do it. All of us loved Grandpa so much and knew that he really wanted to live, so nobody felt up to the sad mission. We realized he would soon be shot; only the condemned man himself remained unsuspecting. The atmosphere was oppressive. We had less and less time and had to come up with a plan of sorts. Finally, a solution was offered. Dr Türschmid could not be saved, but at least we could offer him a less heartbreaking farewell. He was given a pair of strong shoes, new prisoner’s gear, and some provisions for the “transfer.” We explained that he had to move to the Strafkompanie and that actually the orders had arrived earlier, but we staged the charade of turning him into a patient, which we could no longer continue. Grandpa was terrified. “Why penal? Keep me in as a patient, don’t send me off!” He was still unaware of what was in store for him. His mates had tears in their eyes and felt unable to control their emotions. But although Türschmid saw that our behaviour was strange, he was still clueless about the worst soon to come. In less than an hour, he was marching in the line of the condemned to Block 11, which we could see from the windows of Block 21. The grim procession was stopped in front of Block 11. Blocksperre had been imposed, so no one was allowed to leave his block. All we could do was to stand by the windows and watch our mates waiting to be killed. Dr Türschmid turned his face towards us; it was deathly pale. He nodded a few times and wanted to make a gesture with his hand, but his arms must have been stiff with terror. The witnesses to the scene, all hardened Auschwitz prisoners, were tearful. “Farewell, Grandpa!” The marching group disappeared in the corridor of Block 11. In a short while, the execution started. 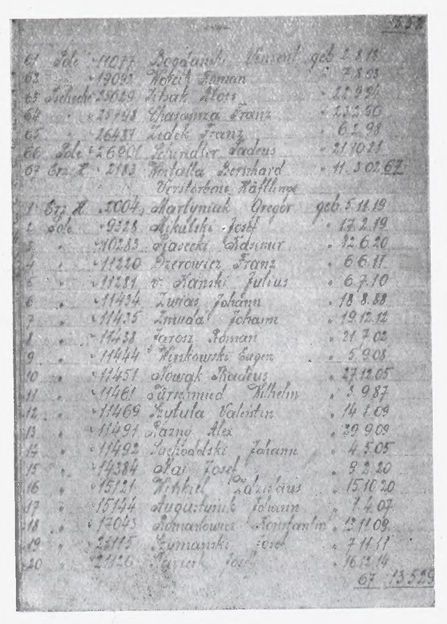 In June 1942 Dr Türschmid’s family received an official notification that he had died of pneumonia on 12 June, 1942. The particulars of his death are recorded in the Stärkebuch, that is the camp register. Also the court files for the trial of the Auschwitz personnel, which was held in Kraków, contain a letter written by the Lagerarzt concerning No. 11461 and giving details of his death (volume 37, sheet 48).

Earlier in June 1942 a transport of prisoners from Warsaw’s Pawiak jail arrived in Auschwitz. One of them was Dr Janusz Okła, who was registered as No. 41698. After a few days of working on the Bauhof,11 he developed an abscess in his left foot and was admitted to the hospital in Block 21. Dr Türschmid had been killed just a few minutes before. The patient Okła had to become head of the septic ward.

Notes
Notes 1–9 and 11 by Teresa Bałuk-Ulewiczowa, Head Translator for the Medical Review Auschwitz project.
Note 10 retained after the original.