Dr Celina Choynacka arrived in Ravensbrück on 1 August 1944 on an evacuation train from Auschwitz. It was an especially difficult time in Ravensbrück, because the camp was receiving transports of women prisoners evacuated from various jails and other camps, as well as from Warsaw, where the Uprising1 against the Germans broke out precisely on 1 August. Importantly, Choynacka already had an Auschwitz inmate’s experience behind her, along with the hard work of a prisoner doctor in that camp. 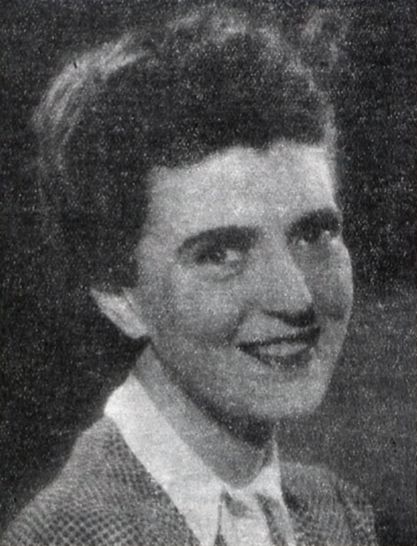 She was born on 27 December 1912 in Berlin. When her parents returned to Poland, she finished her grammar school2 education in Poznań, went up to university, and in 1938 graduated from the Faculty of Medicine of Poznań University. On 1 June 1939 she started work as a junior assistant in the Internal Diseases Hospital run by the Polish social insurance company Ubezpieczalnia Społeczna.

When the War broke out, her supervisors decided she would be better off working as a general practitioner, which she did until she was arrested by the Gestapo in 1943. At this time she was involved in the resistance movement: her task was to handle the undercover provision of medications to the Polish population of various towns and villages in a catchment area that extended as far east of Poznań as Bydgoszcz3 and its neighbourhood. From 2 March to 30 September 1943 Dr Choynacka was imprisoned in Fort VII in Poznań,4 and on 1 October she was deported to Auschwitz, where she worked as a prisoner doctor for about ten months, though the conditions made the administration of medical care practically impossible. Yet, even in such dire conditions, she performed her professional duties as meticulously as she always used to do.

She went down with typhus, even though she had been inoculated with the Weigl vaccine supplied by Dr Janina Węgierska. What was worse, she broke her right tibia,5 but she recovered both from the disease and the injury thanks to the gentle care of her friends, especially the other women doctors.

On 14 July 1944 she was transferred to Ravensbrück. From late August she was employed there as a prisoner doctor in Block No. 11, the hospital for working women. The hospital was closely supervised by the SS doctors, who held weekly selections6 of the inpatients, so Dr Choynacka and the other prisoner doctors kept bogus medical records in order to protect women from being discharged before they were fit enough for work, or from being selected for death in the gas chamber. As even the most basic medicines were in short supply, she had to procure them illicitly.

She performed all the medical procedures calmly and carefully, without any fuss or affectation. She was reliable and had a strong sense of responsibility for her work. The patients could feel it quite clearly and gave her their love and absolute trust. Her impeccable conduct brought immense comfort to the sick women.

I feel obliged to relate my personal memories connected with Dr Celina Choynacka. In November 1944 I was in the prisoners’ hospital with inflammation of the kidneys. It was a relapse of the illness. The internal oedema was responsible for a heart problem too. I had to fortify my heart, yet we were not receiving any food parcels at the time, so sugar was a priceless commodity. One evening, Dr Choynacka came and gestured to me to follow her, so I obediently crawled out of bed. In a dark corner screened off by a hanging blanket, she felt a vein in my arm and gave me a jab of glucose, without saying a word. Later I had a series of five more injections. It gave me a new lease of life. I had not known Dr Choynacka prior to my hospitalisation, I met her for the first time in Block 11. So, by helping me, she was not doing a favour to a friend or acquaintance: she was simply a prisoner doctor helping another inmate in need.

On 28 April 1945, Dr Celina Choynacka was put on the last evacuation march the Germans organised out of Ravensbrück, which was heading for Hamburg. She wanted to see her ailing mother as soon as possible, so she escaped from the marching column. Dr Choynacka reached Poland on 17 May 1945, only to find that her mother had died. In June she was re-employed by the social insurance company as a general practitioner. On 1 May 1949 she began work as an occupational physician for the Cegielski engineering plant in Poznań. In 1951 she earned her doctoral degree in medicine and became a specialist in rheumatology. From then on, she worked for Cegielski’s in that capacity. Sadly, her confinement in the prison and concentration camps had ruined her health and left a deep mental trauma. Dr Celina Choynacka died suddenly on 28 September 1955.

a—notes by Teresa Bałuk-Ulewiczowa, Head Translator for the Medical Review Auschwitz project; b—note by Marta Kapera, the translator of the article.