The social activist Teresa Lasocka-Estreicher died in Kraków on 16 January 1974, a month short of her 69th birthday. Teresa did not belong to a political party,1 but she enjoyed good relations with members of the peasants’ party2 and the PPS.3 She was known for her remarkable dedication and commitment, ingenuity, and courage during the Second World War, when she engaged in the underground resistance movement against the Nazi German invaders. Veterans who served in the local resistance groups operating in Kraków, and of course survivors of Nazi German prisons and concentration camps remember her by her nom-de-guerre, “Tel.” 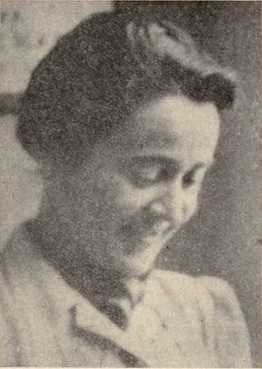 Teresa Lasocka was born on 22 February 1904 in Monasterzyska.4 She was the daughter of General Józef Lasocki5 and his wife Maria née Ramaszkan. Teresa spent the whole of the First World War in Vienna. In 1918 she and the rest of the family moved to Kraków, following the restoration of Poland’s independence. She went up to the Commercial College6 for a course of study, and graduated earning a master’s degree. Her love of the fine arts encouraged her to enrol at the Jagiellonian University’s Faculty of Philosophy for Art History, and she completed this course of study in 1931.

Teresa earned a reputation for her social work in German-occupied Kraków during the Second World War. She joined the nascent underground resistance movement already in the first months of the War, making use of her manifold relations with progressive political groups. She listened in secret to foreign radio broadcasts7 to collect news and information, worked with the Polish underground press and distributed its publications. Thanks to her wide circle of friends and acquaintances, she helped people cross the border illegally and get information out of Occupied Poland to the western Allied countries. She also helped to procure false documents for them.

In 1939 Teresa Lasocka was one of the first to send information abroad to the western Allies about the arrest of the academics of Kraków8 and their subsequent deportation to Sachsenhausen concentration camp. She also disseminated information about the looting of Poland’s heritage and works perpetrated by the Germans; she was able to send details relating to the Veit Stoss Altarpiece,9 the pillage of the country’s museums, libraries, and the collections preserved in the Treasure House of Wawel Castle.

Teresa started to take a deeper interest in the tragic plight of the political prisoners and the policy of extermination pursued by Nazi Germany when the Gestapo arrested her sister Ewa. On 20 September 1940, Ewa Lasocka was arrested and imprisoned, first in the Montelupich10 and later in Tarnów prison, and subsequently sent to Ravensbrück concentration camp. In 1943 Teresa’s brother, Capt. Stefan Lasocki, was arrested and sent to Stutthof, where the concentration camp ordeals exhausted and eventually killed him after a year in the place. These experiences made Teresa decide to channel all her work in the resistance movement into easing the plight of those imprisoned in Nazi German jails and concentration camps.

Working on her own would not have yielded good results. Teresa intensified her work with organisations, first with the Kraków Polish Red Cross department for aid to prisoners, and next with Patronat Więzienny (Patronage for Prisoners)11 affiliated to the RGO.12 She also worked with the Political Parties’ Coordinating Committee, of which her uncle Zygmunt Lasocki, a former diplomat and parliamentary deputy for PSL, was a member. From this time on, she worked on an everyday basis with eminent social activists operating in the local resistance movement—personalities such as Dr. Zygmunt Gabryel Klemensiewicz (1874-1948), president of the Kraków branch of the Polish Red Cross; Maria Zazulowa of the RGO, and Stanisław Plappert of the resistance movement in the Polish social insurance company. Teresa also established working relations with the leaders of the civilian and military resistance movement in Kraków and several other underground organisations, such as the PPS, AK,13 and BCh combat forces,14 and so many of the individuals in the Auschwitz liaison network that it would be impossible to name them all in this article.

She started her mission, which was dangerous and called for intelligence and skilfulness, by going to the prisons and negotiating with the Gestapo on the chances to send in extra supplies of food, medicines, clothing, and disinfectants for prisoners. Sometimes her endeavours brought good results, but above all they created the groundwork for prospective clandestine contacts. Following this line of activity, Teresa Lasocka made a key contribution to the establishment of an organised system providing aid to inmates held in prison in Kraków (the Montelupich jail), Tarnów, Rzeszów, Nowy Sącz, and Zakopane (the Palace Hotel prison). Next, she extended her activities to include concentration camps (Auschwitz-Birkenau, Plaszow,15 Pustkow,16 Liban Quarry,17 and several more).

In the autumn of 1941, Teresa Lasocka established a secret communication network with contacts in Auschwitz. She started by setting up a modest series of links, fragile and occasional at first, for the exchange of kites (secret messages), but gradually developed these sporadic contacts into a regular, well-concealed communication system operating as a two-way channel for the transmission of news and information, reports, the underground press, medicines and poison pills, weapons, maps of the concentration camp, and a variety of documents, warning notices, as well as food and clothing. Lasocka was the chief recipient and sender of clandestine mail for the resistance movement inside Auschwitz, which started as an all-Polish group but later developed into the international Kampfgruppe Auschwitz under the leadership of prisoner Józef Cyrankiewicz.18

Lasocka procured the resources needed for these extensive activities. She financed them, partly out of her own pocket; she organised escapes, collected and safeguarded illicitly obtained records to serve in future as evidence of the Nazi German crimes. She had access to the secret broadcasting stations operated by the resistance movement, which she used to inform the free world of the atrocities the Germans had committed or were about to commit. She disclosed the notorious Moll Plan19 for the complete destruction of Auschwitz along with all of its prisoners. She brought about the publication of a list of SS henchmen operating in the camp; she addressed an appeal to free people; she exposed the operation to exterminate the Jews, and the pseudo-medical experiments20 conducted by Clauberg, Schumann, and other SS physicians; she sent out information about numerous collective and individual executions, and about the gas chambers and crematoria—technology the Germans were doing their utmost to conceal.

Teresa Lasocka made a major contribution to the establishment of an underground group code-named PWOK (Pomoc Więźniom Obozów Koncentracyjnych—“Aid for Concentration Camp Prisoners”), which started activities in 1943, enhancing the assistance given to inmates and running it more efficiently and on a fairer basis. The work of this new organisation helped to collect more funds and save thousands of lives. I need only to say that thanks to Teresa Lasocka hundreds of parcels, each weighing several kilos, with indispensable medicines and anti-typhus vaccines, were clandestinely delivered to the prisoners’ hospital in Auschwitz.

Lasocka’s associates working with her in the resistance movement are full of admiration for her, commending her organisational skills. Here is an excerpt from an account I have received from Wojciech Jekiełek (nom-de-guerre Żmija), who was a member of a BCh combat group:

Teresa Lasocka was one of the genuine, modest heroines who worked in this period with our special unit of the BCh located in the environs of the camp. . . . As commander of this unit, which was organising aid for the inmates of Auschwitz, I had been trying for some time to draw the attention of the leaders of the local Roch peasants’ group21 and the commanding officers of the Kraków branch of BCh to the matter of Auschwitz. . . . In the summer of 1941, when I was finalising my efforts, I was put in touch with Teresa by her uncle Zygmunt Lasocki, who acted as a go-between, and Narcyz Wiatr-Zawojna,22 commander of the local branch of BCh, who passed on the contact. We met in Teresa’s apartment at No. 11 on the Jagiellońska in Kraków and made arrangements to join in the work she was conducting in the Generalgouvernement23 on behalf of the prisoners of Auschwitz. . . . Teresa arranged a meeting for me in her apartment with Seyfried24 of the RGO. The meeting took place a few weeks later, and brought very good results, extending the resources of the aid programme, especially the medicines. From that time on, at least twice a week we received a consignment of medications from her for Auschwitz. . . . She considered organising medicines for Auschwitz her moral duty.

Teresa Lasocka saw to the regular publication in the underground press of news on the situation in the prisons and concentration camps. In the later years of the War, a paper entitled Biuletyn PWOK printed on a copying machine appeared on a more or less weekly basis to expose the crimes committed in those places of ordeal.

Thanks to the efficient and heroic efforts in which she took a leading part, as well as to her personal courage, many of the escapes she helped to organise succeeded. Usually they involved Auschwitz prisoners. Successful fugitives joined the ranks of underground resistance combat units or the secret groups providing aid to the camp, or they helped Teresa with her work in Kraków. She would have hidey-holes, clothing, weapons, and food ready for them.

It was something of a miracle that on several occasions Teresa Lasocka managed to avoid being arrested by the Gestapo. Alas, a few people from her circle fell into the hands of the Gestapo, which usually led to their death, casting her into profound grief. Yet even in the face of immense danger and despite the warnings, she never abandoned her activities.

The prolific archival records documenting the Nazi German prisons and concentration camps which Teresa Lasocka collected and kept safe played an important role in the post-war trials of the Nazi German criminals. They were used as evidence both in the international proceedings, such as the Nuremberg Tribunal, as well as in Poland, for instance in the trial of Rudolf Höß25 and other members of the staff of Auschwitz.

Teresa Lasocka continued her work in Kraków after the liberation of the camps, helping to organise aid for survivors. In 1945–1946 she was head of the department dispensing aid to survivors in the Kraków Voivodeship26 Office. But as soon as the situation was under control, this tireless, calm, quiet and unassuming campaigner withdrew from public affairs. She was left exhausted and her strength had been sapped by the gigantic commitment she had made to the stressful and dangerous work in the resistance movement.

Survivors remember Teresa and continued to visit her right until her last days. Her friends were heartbroken to bid her farewell, powerless in the face of a serious progressive disease. Teresa, wife of Professor Karol Estreicher of the Jagiellonian University, was laid to rest in the family tomb in Kraków’s Rakowicki Cemetery. The Commander’s Cross of the Order of Polonia Restituta27 was conferred on her in acknowledgement for all that she had done.

To paraphrase the words of Winston Churchill, who uttered them in connection with the Polish pilots who fought in the Battle of Britain, we could say of Teresa Lasocka that never had so many owed so much to just one woman.

All notes by Teresa Bałuk-Ulewiczowa, Head Translator for the Medical Review Auschwitz project.

This biographical note was compiled on the basis of the following: