Dr Jerzy Gromkowski was born in Zakopane in 1915. His parents were immigrants from the Congress Kingdom1 and dedicated members of SDKPiL.2 In 1939 he graduated from the Medical Faculty of the University of Warsaw. During his university days he was an active member of a students’ organisation called Życie (Life). Under wartime occupation Dr Gromkowski organised the medical and sanitary service of the People’s Guard.3 He was imprisoned in the Pawiak jail4 and sent to Auschwitz. He died in Mauthausen5 in 1945. 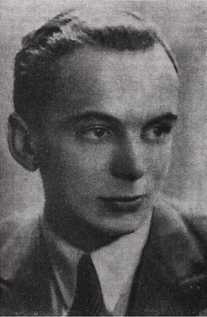 When I decided to become a doctor, I dreamed of Żeromski’s Houses of Glass,6 and how we would be getting rid of poverty and providing medical care for all the people. That’s probably why one of my best memories of those days is of the first time I attended a meeting of the Students’ Medical Society,7 and learned I wasn’t the only one to have such aspirations. There was a distinct group of socially-minded medical students, full of enthusiasm and ready to spring into action. Their leader was a tall, blond boy with bright, thoughtful eyes. He was friendly, always ready to help, and had a keen sense of humour, but whenever he had the chance, he always expressed his left-wing views. We got to know each other and soon became friends. There came a time when we engaged in sharp discussion on subjects like the way the medical service would be organised in the future, medical ethics, planned maternity, and other urgent social problems. Jerzy was always the tribune of our group.

I can recall situations when our political adversaries, often very hostile and intransigent ones, were impressed by the clear and logical reasoning behind Jerzy’s arguments, which made them embark on a calm discussion, and sometimes they would even come to appreciate the idea of progress. The fact that we won the 1937 elections to the governing board of the Bratniak Spójnia students’ union8 was largely due to Jerzy. Alas, later in the day clubs and knuckle dusters took over. Despite the mounting problems, including arrests, we continued to organise a series of operations. We took an active part in the Dom Medyka9 building project. We established a diversified range of self-help services for fellow students who could not afford to pay their fees. We spent our vacations on socially-oriented countryside trekking tours, administering first aid in the distant parts of “Class B Poland”10 and witnessing the tragic results caused by social diseases.

Jerzy never gave in to despair. He was always able to define a plan of action for now and a roadmap for the attainment of the great aim in the future, as he saw it. In spite of the threat of war, we continued to discuss our plans. Someone asked, “And what if Hitler wins?” I remember what Jerzy said: “I for one will keep on fighting on Polish soil right to the end, right until victory.”

The social section of the Students’ Medical Society put a lot of effort and enthusiasm into providing medical care for juvenile delinquents. Jerzy did the most difficult tasks, visiting prison hospitals. He used to say that the education of the young was one of the fundamental conditions to be met if the country was to enjoy a better future. The juveniles in our care, many of whom were offenders due to hunger, were an outward sign of the serious negligence of this aspect. Oftentimes we observed that our efforts brought but a negligible result compared to the enormous needs, but at such hard times “Grzela” was always able to keep our spirits up and ensure us that we were making progress. Our relations with the youngsters in our care would continue for many months of them working in children’s day centres.

Then the hardest times came, when the universities and colleges went fascist.11 As usual, Jerzy’s reaction was strong: he never missed an opportunity to voice his condemnation of measures which were contrary to respect for human dignity. Often he would take an active part in the defence of fellow students who were being forcibly removed from a lecture or hurt in knuckle duster attacks by gentlemen sporting badges with little swords on their lapels.12 Often when a Falanga member spotted Jerzy’s stalwart figure sitting in the “ghetto” benches, he would decide to withdraw from taking part in the repressive measures that had been planned against our group.

Soon a proposal was put forward to rusticate Jerzy for non-compliance with the regulations the University authorities had introduced. He had spoken at a public meeting of medical students, about the finest chapters in our history, showing the University’s democratic and progressive traditions. In the end, a majority of the academic staff and students decided that Jerzy, who was one of the best students, should stay in the University.

Jerzy was one of the first in his year to graduate, just before the War broke out in 1939. He graduated with the top grades. On completing his internship, he took up an appointment in Dr Roguski’s13 ward at Wolski Hospital.14 Jerzy always said that he was fascinated by internal medicine, the “queen of the medical sciences.” As soon as he was appointed, he started to build up a reputation as a very talented physician with an aptitude for medical research. He embarked on a series of projects on haematology and kidney diseases. He was an avid reader, constantly brushing up his foreign language skills.

When the War broke out he was in Zakopane, his hometown, looking after his mother, who was seriously ill. When he was called up for army service, he had to make his way across the country, which was already in the grip of invasion. Once he reached Warsaw, he took part in the defence of the city and returned to work in the hospital. Under wartime occupation Wolski Hospital had a special part in the resistance movement, and “Grzela” was the organiser of all the operations conducted in the area by the People’s Guard sanitary service. Not many people knew that this splendid physician, who spent many hours every day working very hard in the hospital, organised and later managed the sanitary service attached to the People’s Guard. By 1943 the network of these secret sanitary stations had expanded and was providing a medical service for all the combat units of the People’s Guard. The growing number of casualties in combat operations had to be seen to in various locations; they had to be treated in their forest hideouts or brought into hospital. “Grzela” tackled the trickiest and most dangerous medical tasks, and in addition he also engaged in an extremely challenging venture to raise political awareness. When he had finished his medical duties in an underground resistance unit, he would pass on orders to them, and deliver a lecture or give them a pep talk to bolster their confidence in ultimate victory.

Wolski Hospital served as the base, and hardly a day passed without someone in need of medical advice, a dressing, or a safe haven turning up at Jerzy’s sanitary station. The people who reported to him were either on the run from the Gestapo or Party activists;15 or they had been wounded or had escaped from the ghetto.16 Now and again the most unlikely things happened. For instance, a girl with an abdominal bullet wound who had escaped from the ghetto during the fighting there17 managed to cross the whole of Warsaw on foot18 in a bloodstained dress. Comrade Balicki had to try to get to Wolski Hospital for treatment. “Grzela” had to put in a lot of effort to keep her safe. After she had been operated, she started to mumble something in Hebrew. Every day of her stay in the hospital meant risking serious reprisals. Nonetheless, the girl’s life was saved.

There were many operations of this kind, and each of them called for a calm, cool-headed approach, which is what “Grzela” always had. That’s how we continued to work until July 1943. 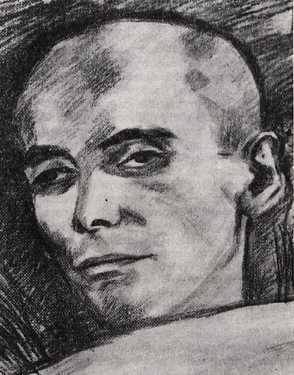 Dr Jerzy Gromkowski in the last days of his life, just before he died in Mauthausem concentration camp (from a drawing made in the camp) Source: Przegląd Lekarski – Oświęcim, 1965.. Click the image to enlarge.

Alas, 15 July was the last day of our work together. That day I saw Jerzy for the last but one time. It was in a sinister corridor on aleja Szucha.19 We were held in a tram cell,20 convincingly pretending not to know each other. Then came the difficult days when we were interrogated. News reached me that “Grzela” was tortured. He remained silent. I recalled the time when he was taking the oath for the People’s Guard, and emphatically repeating the words “and I shall never betray anything...” My last memory of his face is hazy, like seeing him through a mist. It was in Birkenau in late January 1944. I was seriously ill, down with the after-effects of epidemic typhus. He managed to come over from the Baukommando.21 We exchanged a few words. I knew that despite the dreadful conditions in the Roma camp,22 he was not losing hope and still believed in our ultimate victory and continued to put up resistance. That was a tremendous help psychologically. A few days later, he was put on a transport for Mauthausen. I learned from his fellow-inmates that he was overexerting himself, working beyond his capacity, full of dedication to his patients and not looking after himself. “Grzela” developed a serious condition—sepsis—which came as a terrible blow to his patients and numerous friends, prisoners from all over Europe.

They left no stone unturned to save his life. His colleagues offered a transfusion of their own blood. They took risks to procure medicines for him and give him the best possible conditions. Alas, his body was too exhausted. Jerzy Gromkowski’s funeral was held on the eve of the camp’s liberation, and turned into a huge manifestation of international friendship, bonds between the forces of progress, unflagging confidence in human goodness, and the struggle for a better future for the world. Speeches were delivered in eight languages.

This brief memorial is but the beginning of the work to be done, because Jerzy deserves to have a full biography, including information supplied by the many comrades “Grzela” he had at every stage of his activities.

He was a strong, courageous, and above all an honest and good man, who devoted the whole of his life to the fight for a better future in line with the philosophy of dialectical materialism23 in its deepest sense. His motto was “Only a good person can be a good physician.”

When I spoke to Jerzy’s mother, Zofia Gromkowska, after the liberation, and told her how her son had fought and how he had died, I realised how very like his parents he was and how consistently he followed in their footsteps ideologically. His parents were typical of married couples who were veterans of the 1905 Revolution.24 His father was a craftsman, and his mother was university-educated. Both were members of SDKPiL and had devoted the whole of their lives to the revolutionary struggle.25 They had to live for years in exile, because of the Tsar’s repressive measures against them. They were individuals of the highest integrity, always demanding the most of themselves and devoting everything to others.

The greatest sacrifice of their lives was their son.