As we know, several of the doctors who were shot in Auschwitz were disabled, and one of them was the radiologist Dr Czesław Gawarecki, who was deaf. His disability was not a hindrance to his professional work, but it made it much harder for him to adapt to life in a concentration camp, although it was not the reason why he was shot. There are not many sources of information on Dr Gawarecki, nonetheless I shall try to present his biography, because he deserves to be commemorated. 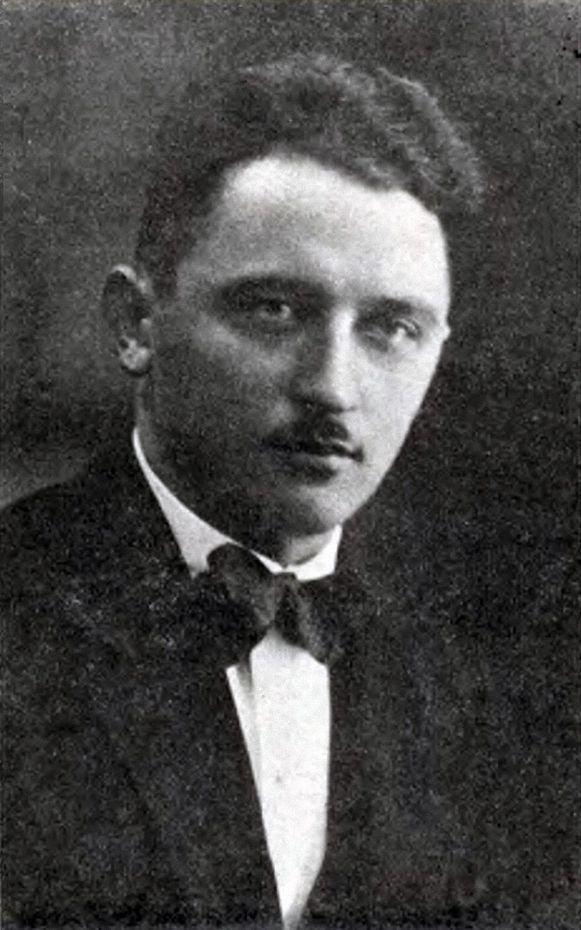 He was born in Warsaw on 27 March 1901, to Stanisław Gawarecki and his wife Stanisława Marcjanna née Gasparska. Young Czesław Feliks Gawarecki served in the POW1 when he was still at school, and later, in 1919 and 1920, he was a combatant on the north-eastern front.2 In 1921 he attended special courses for veteran soldiers to complete his grammar school education, passed the school-leaving examination, and went up to the University of Warsaw to read Medicine, graduating as a Doctor Medicinae Universae (Doctor of General Medicine, similar to an MD degree) on 5 December 1927. From 1 January 1928 to 1 October 1930 he was an assistant in the University’s Chair of Anatomy, and from 1 March 1929 to 1 October 1930 in its Institute of Radiology. In the 1928/29 academic year he was a student of the Faculty of Mathematics and Physics, where he “did” (obtained a credit for attending) the First Physics Laboratory.

In the following year he held a variety of appointments. In 1930-1932 he was a volunteer working in the First X-Ray Department of the Warsaw Health Insurance Fund (Kasa Chorych w Warszawie; its director was Lt.-Col. B. Sabat). At this time Dr Gawarecki also completed a three-month advanced course in bacteriology at Państwowy Zakład Higieny w Warszawie (the National Institute of Hygiene, Warsaw). Subsequently he was head of the X-ray department at Szpital Związku Komunalnego w Wieluniu (Wieluń General Hospital, 1932-1934); and later worked as a physician in the X-ray department of Ubezpieczalnia Społeczna w Warszawie (the Social Insurance Institution, Warsaw, 1934-1936). He also did voluntary service in the Warsaw University anatomic pathology laboratory, and in the tuberculosis ward of Wolski Hospital.3 In 1936-1937 was head of the X-ray department of the Excelsior Sanatorium in Iwonicz; and held a similar post in 1937-1938 at the Lwigród Sanatorium in Krynica. In May 1934 he completed an anti-gas defence and rescue course.

Dr Gawarecki was very ambitious and hard-working, and published 10 scientific papers. He was an elegant and well-dressed man, and his patients and people who knew him admired and respected him. In 1926 he went down with sepsis combined with inflammation of both ears, which left him with a serious hearing impairment. Afterwards he always used a hearing aid. As his cousin Henryk Gawarecki wrote, when he went deaf he also lost the ability to modify and fully control his facial expression. This, coupled with the sharp but cold look in his eyes and his somewhat monotonous voice, created an artificial distance between him and his interlocutors. However, he was not daunted by his disability and was successful in his professional and scientific career, and in social relations. He was awarded a prize in a ZUS4 competition for a doctor’s diary. He had a wide range of interests and hobbies and was an avid reader. In 1938 Dr M. Kossowski, chief physician of the Social Insurance Company, wrote a very good letter of reference for Dr Gawarecki, commending him for his reliability and hard work. Dr Gawarecki married Hanna Dąbrowska, a graduate of Polish Philology, and they had a daughter Danuta. They were close friends of Prof. Bogdan Suchodolski.5

On 1 April 1938 Dr Gawarecki started work as acting head of the X-ray department of the Lublin social insurance company (replacing Dr J. Adamczyk), and continued in this employment until the morning of 11 March 1941, when the Gestapo arrested him at his workplace, confined him in Lublin Castle,6 and subsequently sent him to Auschwitz. This was the third time Dr Gawarecki was arrested, but on the two previous occasions he was soon released. The first time was straight after the Wehrmacht entered Lublin; he was detained for a day. On the second occasion he was held for a week for not shaking hands with a German officer who came to the social insurance company for an X-ray.

It is hard to establish the real reason for Dr Gawarecki’s third arrest. All we know is that he was detained along with over ten other people. According to Dr Zygmunt Mańkowski of the Maria Curie-Skłodowska University of Lublin, the arrests were due to an informer called G., who was later eliminated by the resistance movement. Dr Gawarecki could not have escaped the Gestapo’s notice for long, because he took risks on an everyday basis. For instance, he issued a lot of X-ray certificates with stepped-up diagnoses to help people in dire straits, in need of better ration cards etc. In addition, he attended a variety of meetings, and people remembered “the deaf radiologist.”

We also know that Dr Gawarecki was a member of an underground resistance group called KOP (Komenda Obrońców Polski; Polish Defence Command) which was founded in late September – early October 1939. His cousin Henryk writes that the Gestapo regarded him as the propaganda chief of the Lublin division of KOP. After a harrowing investigation in Lublin Castle, Dr Gawarecki was put on a train that transported 249 arrestees from Lublin to Auschwitz on 6 April 1941. They were registered in Auschwitz as Nos. 13695 – 14943. The arrival of this transport is recorded in Danuta Czech’s Auschwitz timeline.7

After quarantine, the initial and hardest time in the camp, Dr Gawarecki, who was already suffering from inanition, managed to get a job in the Auschwitz prisoners’ hospital. Soon he was appointed head of the Block 28 X-ray unit. The unit’s earliest surviving X-ray registers are dated 5 March 1941. This X-ray unit played a very important part in the hospital’s activities, both for diagnostic reasons (it X-rayed thousands of prisoners), as well as for its contribution to the operations of the prisoners’ underground resistance movement (it issued fake diagnoses to save lives).

I have received the following account of the Auschwitz X-ray unit, which deserves a separate study, from Dr Rudolf Diem, a survivor who worked in admissions in Block 28 and was a member of the resistance movement:

I remember that Gawarecki worked for us as a radiologist in Block 28. I think he was the first specialist in the field. He was very hard of hearing, and didn’t always catch what was said to him. As usually happens in such cases, he would keep looking round and carefully observing his interlocutors. After a time he “organised”8 a battery-operated hearing aid for himself, whereupon he became the butt of pranks played by young pflegers9 who found it amusing to shout jokes, some of them quite rude, into his microphone. Dr Gawarecki took it all with an indulgent smile and just said, ‘Let the youngsters play!’

Gawarecki left a lasting memory especially for the following reason. We made an agreement that he would moderate “bad” X-ray results by not recording diagnoses of a patient’s serious condition, such as pulmonary tuberculosis, lung abscesses, cardiomegaly, or suspected cancer. We all knew that the SS doctors made use of such diagnoses to send patients for a phenol jab.10 On the patient’s X-ray referral note I would put one of the secret symbols we had agreed on (I used the same code system on referrals for sputum tests).

To illustrate the way the resistance movement operated in the prisoners’ health service, Dr Diem recalled the following incident:

I remember a certain case: one of the patients presenting during an SS doctor’s round (I think the SS physician involved was Dr Helmut Vetter11), was a fibro-cavernous pulmonary tuberculosis case, a miserable creature suffering from asthenia. I presented him as a Durchfall (diarrhoea) patient. But the SS doctor was not convinced and said that it was definitely fibro-cavernous pulmonary TB. He wanted the patient sent to the X-ray department. The orderly Władysław Mucha realised what was afoot and left the dispensary on some pretext to warn Gawarecki that I had been caught in a trap and asked him not to give the true information in his report on this poor fellow’s chest X-ray. Gawarecki came up to the dispensary and told the SS doctor that it was a case of diffuse panbronchiolitis. The SS doctor was still unconvinced. He shook his head in disbelief but shrugged it off, telling us to keep the patient under observation and report the result to him. That patient’s life was saved.

In another letter Dr Diem wrote,

Keeping fake diagnoses for patients with a serious condition saved them from SS selections for jabbing, but in many other cases it gave us the opportunity to admit extremely debilitated prisoners to the hospital on the grounds of a fake diagnosis. Very often a fake diagnosis was the only chance to get a prisoner out of a work commando in which his life was at risk from a criminal-minded kapo. Sometimes it was possible to help a prisoner wrested out of a commando in this way to escape from the camp.

Dr Czesław Gawarecki, Auschwitz political prisoner No. 14852, was shot in Block 11 on 23 April 1942, on the grounds of a death sentence issued by the Gestapo. He was executed by the camp’s political department. Dr Gawarecki’s friends learned in time that he was due to be executed and administered a dose of drugs to save him from going through the anguish and trauma. He died without realising that his life was about to end.

It is difficult to give even an approximate account of the circumstances attending the execution of Dr Czesław Gawarecki. The record for 23 April 1942, the day he died, in the relevant passage in the Stärkebuch (Daily Register of Inmates) says that a total of 81 prisoners of various nationalities died on that day. According to my calculation, this figure includes 17 prisoners who arrived on the same transport as Dr Gawarecki. However, we will never be able to establish how many of those 81 deaths were due to execution, and how many were due to “natural causes” (such as lethal injections etc.).

Dr Gawarecki’s wife Hanna went through the concentration camp ordeal, too. On learning of her husband’s death she left for Warsaw, but quite soon she was arrested by the Gestapo and sent to Ravensbrück. She survived and on liberation was sent to Sweden for medical treatment, but died not long after her return to Poland.

On the ground floor of the Lublin Social Insurance building on ul. Hipoteczna there is a memorial plaque in tribute to the doctors and other employees of that institution who were killed by the Nazi Germans. Dr Czesław Gawarecki is on the list of victims. The facts I have related above fill in the background to his story.

This biographical note on Dr Czesław Feliks Gawarecki is based on the following sources: