The internist and cardiologist Dr Stefan Mirau was one of the few Polish doctors in the Free City of Danzig (now Gdańsk)1 in the interwar period and deserves a special mention for his personal achievements. Arrested by the Gestapo in Danzig during the first days of the War and imprisoned in Stutthof concentration camp as political prisoner No. 7924, he died on 24 April 1942, having contracted typhus fever from a fellow inmate. A few years ago Gdańsk City Council passed a resolution to honour him by having one of the streets in the city named after him. 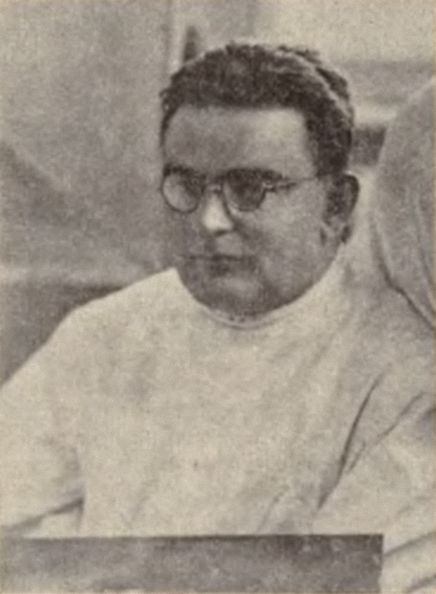 Stefan Mirau was born on 2 August 1901 in Różyny (in the Powiat of Pruszcz Gdański) into the well-known and respected Pomeranian family of the landowner Jan Mirau and his wife, Helena née Kręcka. He attended German schools, first in Kościerzyna and later the Städtisches Gymnasium Danzig,2 which he finished in 1921. In 1917, during his school days in Danzig, he and his schoolmates, including Dr Witold Kopczyński, whose biography by Dr Witold Zegarski has been published in Przegląd Lekarski – Oświęcim (1969: 201-204), and Alf Liczmański, founded a secret branch of the Association of Gdańsk Philomaths and Philareths;3 when Gdańsk became a Free City the group set up the city’s first division of the ZHP Polish scouts’ and guides’ movement.

As President of the Association, he organised regular meetings, holding them in his apartment in secret from the German police. Those who attended arrived one by one, so as not to arouse suspicions. Nevertheless, Mirau’s apartment was searched several times, but luckily the Germans never found any evidence of the secret meetings.

On finishing school and passing the Abitur4 in 1921, Stefan Mirau went up to the University of Munich to read Medicine, and completed his studies in 1926, graduating from the University of Berlin. He attended lectures given by eminent specialists like Professors Bier, Bumm, and Sauerbruch, who were his supervisors when he started his medical career after graduating. In 1928-1932, he worked as an internist and cardiologist in the St. Hedwig-Krankenhaus in Berlin,5 and as head of its internal ward. Later he held a similar appointment in St. Joseph’s Hospital,6 Berlin (St. Joseph Krankenhaus Berlin-Weißensee).

However, he missed his hometown and working with Poles, so he decided to return home in 1932. The next year he obtained the consent of the Danzig Medical Chamber to work as a specialist in internal diseases. Despite numerous difficulties and the harassment that Polish doctors met with in the interwar period in the Free City of Danzig, he performed his duties tirelessly day and night, frequently providing his services free of charge. The older generation of the Polish community in Gdańsk7 still cherishes the memory of the generous care he gave to poor families. He treated Polish postal workers and railwaymen, and did medical examinations and check-ups for Polish schoolchildren and scouts.

He served as head the Polish Red Cross outpatient maternity and children’s clinic at Number 26 on what was Sandgrubestrasse at that time (now ulica Księdza Rogaczewskiego). The clinic’s main task was to reduce infant morbidity and mortality. In late 1933, he initiated the distribution of baby formula milk produced by a new dairy kitchen to mothers unable to breastfeed.

The outbreak of the Second World War put an end to Mirau’s intensive activities. He suffered the same fate as many other Poles from the Free City. He was imprisoned along with other Polish doctors, initially in the Victoriaschule, which accommodated a transit camp in the district of Neufahrwasser (now Nowy Port),8 and later in Stutthof. But thanks to the resolute efforts made for his release by his elderly mother and several influential German doctors (including Dr Wolf of Siedlice), he was discharged from Stutthof, though not for long. Within a week he was arrested a second time, as the Danzig Medical Chamber, which had an exclusively Nazi German membership headed by Dr Grossmann,9 an implacable enemy of all that was Polish, immediately appealed to the Gestapo against this decision.

Dr Mirau was apprehended in his mother’s apartment. She had been evicted three times already within the first few months of the War. I met Dr Mirau’s elderly mother on several occasions while I was waiting in the cold, often for many hours, in front of the Neufahrwasser barracks which had been turned into a prison, for the SS guards to allow me to hand over a food parcel to my father, who was being held there. My father, Antoni Siniecki, had been the superintendent of the Danzig Port and Waterway Council, and now he was in prison. Mrs. Mirau put her own health at risk, standing out at that gate many a morning. She loved her son so much that no effort was too much for her.

On arriving in Stutthof,10 Dr Mirau’s first job was bringing medicaments from the hospital to bedridden patients in the barracks. He then set about organizing a hospital for sick prisoners11 and did his best to obtain a minimum of medicines and food for the seriously ill. He was the chief physician looking after a 50-bed internal ward, working so selflessly that he earned the admiration even of the prison’s SS management. All who knew and came in contact with him remembered him as a good, calm, self-possessed, helpful fellow inmate, who worked in the camp with the same dedication as he had done in the interwar years.

Dr Mirau did all he could to ease the suffering of his fellow prisoners, although he was constantly being watched by the head of the hospital, SS Hauptscharführer Otto Haupt.12 The first letter his mother received from him arrived on 20 June 1940, nine months after his arrest. He sent several more letters to her, writing in each of them that he was well, but also asking her—she was 72 at the time—to look after herself and call a doctor whenever necessary. He was full of hope that after the War they would live in a free and independent Poland.

He wrote that despite all the worries and suffering his work in the camp brought him, he was happy and contented because he could help those of his fellow inmates who were worse off. But neither he nor his mother lived to see the liberation of Gdańsk. He contracted typhus in the epidemic that broke out in the camp in early April 1942, and died on 24 April 1942. His mother did not live to see the city liberated, either. She died at the age of 76 during the fighting for the city a few days before Gdańsk was restored to Poland.

Dr Julian Węgrzynowicz (camp no. 9230),13 who was one of Dr Mirau’s fellow inmates, wrote a detailed relation of the last days of his life:

During the winter I was severely sick with diarrhoea which came on every 15 or 20 minutes. I resolved to get myself admitted to the camp hospital, and I pulled it off. I met Dr Mirau, an honest man from Gdańsk who was working as a doctor there. He’s hardly ever mentioned now, but he did a lot for us. Even the SS men were full of admiration for him. Even though Dr Stefan Mirau had been educated in German schools, had an intimate knowledge of the culture, and spoke proper High German (not dialect), he was a Pole at heart and a good Catholic...

Not much later, an epidemic of typhus broke out, and Dr Mirau was one of its first victims. We were put in one room—let’s call it a room—six of us lived there: Dr Mirau, Jasiński, a dentist or dental technician from Toruń called Gliński or Gliniecki, a pharmacist called Pruszak, Kazimierz Włodarczyk the Kapo, and myself. There were three bunk beds. One day Mirau looked a bit poorly and was not his usual self; so we measured his temperature—38°C, nothing to worry about. We slept through the night. The next day he got up and started working; there were regular admissions to the hospital. But that evening after prayers, it wasn’t Dr Mirau who suggested it was time for lights out (before he had always said that) but someone else, probably Pruszak, told us to switch off the light. Suddenly the light came on, and we saw Stefan was not in his bed; so we put him back in bed. He lost consciousness and was delirious all night ... The next day his temperature shot up and he was unconscious; I took a look at him, he had a rash, so I said to Jasiński, “Listen, Bogdan, it’s typhus, isn’t it?” We took a blood sample, and although we had a general lab, we asked Haupt to send Stefan’s blood sample to a serological laboratory. Haupt went to up to town himself and was soon back with the Flexner result,14 1:1600. We realised that it was typhus fever.

In the evening, we put Mirau in isolation and drew up a timetable of shift duty. The night shift fell to me. I don’t remember which room he was in, perhaps room four close to the women’s ward. I brought all the available medications, some cardiac pills, but in those days, there was no effective remedy for typhus fever, not like today. We would not have let him die. Dr Mirau had a high fever all night, he was delirious and choking. He died in my arms around 5 a.m. He did not see the morning shift... At that time, there was no crematorium in the camp yet, and corpses were taken to be buried in the Zaspa cemetery.15 A special coffin was made in the Tischlerei16 for Dr Mirau’s body. It was made of oak and beautifully painted and ornamented. In the camp he had the reputation of a good man, a real humanitarian, a doctor who always treated everyone with great respect.

He died prematurely, at the age of just 41, and had been fully dedicated to sick inmates. A true son of Gdańsk, he devoted all that was best about him—his heart, his knowledge, and his life—to Gdańsk. He rests in the Zaspa cemetery in Gdańsk.

a—notes by Maria Kantor, the translator of the text; b—notes by Teresa Bałuk-Ulewiczowa, Head Translator for the Medical Review Auschwitz project.

I have used the following materials: