One of the oldest public stages in Poland, the Helena Modrzejewska National Stary Theatre in Kraków dates back to 1781, when it was first formally founded. The official name of the stage comes from Helena Modrzejewska (stage name Helena Modjeska), a 19th-century Polish actress, one of the first to become known for her Shakespearian roles on the European stages beyond Poland and in America.

The Stary Theatre was where the reforms in directing and acting in 19th century led to the development of the so-called Kraków school of theatre, which then inspired the theatrical art all over Poland.

Many artists without whom the art of theatre in Poland and beyond would not be what it is today have connections with the Stary Theatre, including Tadeusz Kantor, Jerzy Grotowski, Konrad Swinarski, Andrzej Wajda, Krystyna Zachwatowicz, Zygmunt Konieczny, Krystian Lupa, Grzegorz Jarzyna, Krzysztof Warlikowski, and Jan Klata.

From 2009 to 2019 the Stary Theatre was part of the international Mitos21: European Theatre Network, uniting prestigious theatres of Europe. This cooperation is bearing fruit in joint international theatre projects.

Since June 2021, the Stary Theatre has been part of the The Union of European Theatres (UTE). 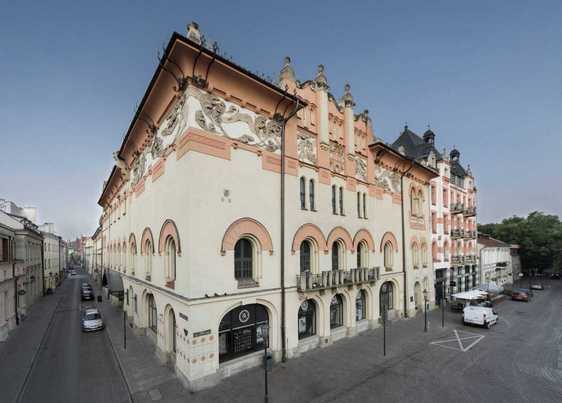 The Helena Modrzejewska Stary Theatre in Kraków. Photo by Paweł Mazur. Click the images to enlarge.

A public task funded in 2020–2022 within the DIALOG Program of the Ministry of Education and Science.

FINANCED WITH THE STATE FUNDS OF THE REPUBLIC OF POLAND
“DIALOG” program of the Ministry of Education and Science
“Medical Review Auschwitz — medicine in the Nazi German concentration camps”
Value of funding: 789,400 PLN
Total funding amount: 789,400 PLN